SUPPORTING VETERANS AND OTHER ORGANIZATIONS 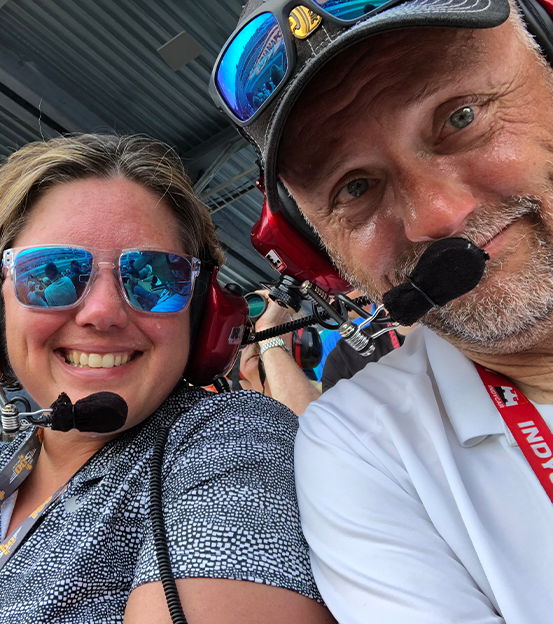 In 1977, Jamie Roe’s father took him to the Indy 500 for the first time where he watched AJ Foyt become the first ever four-time winner of the event.  On that day a passion for the sport and this great event was born.

In 1999, Jamie took his then girlfriend Liz to her first Indy 500 where she watched Kenny Brack win the race in a car owned by the legendary AJ Foyt.  A year later Jamie and Liz were married to each other and to their love of Indycar.

In 2019, the Roe family decided to sponsor a lap in the Indy 500 to honor Jamie’s late father Jack Roe and his brothers on the American Legion Post 32 Honor Guard.  The Indianapolis Motor Speedway assigned them with Lap 99 (there are 200 laps in the race) and the Roe Family decided to use that sponsorship to raise money to assist the Post 32 Honor Guard with their duties to serve our veterans.

Instead of an honor that would last one year, the Roe family has decided their sponsorship of Lap 99 of the Indy 500 will move forward and they will continue to use it to do good for their community.  But, in 2020, 2020 happened and our plans were derailed.  Beginning in 2021 we won’t let anything stand in our way, thus the Lap 99 Foundation has been formed.

The Indy 500 takes place on Memorial Day Weekend and has always been a standard for honoring those who given the last full measure of devotion to the cause of freedom.  If you have never watched the pre-race ceremonies that honor the fallen, you should do so this year.  Nothing is more moving than having a full military Honor Guard offer a 21-gun salute then the playing of Taps as 300,000 Americans stand in silent, somber reflection.  As such, the Lap 99 Foundation will always support veterans groups and causes, particularly the American Legion Post 32 Honor Guard.  Additionally, the foundation will also support charitable causes which are close to our heart.

Those who support Lap 99 Foundation efforts can rest assured of several things, first the sponsorship of Lap 99 does not come out of charitable funds, it is paid for by the Roe family.  And we will strive as near as possible to ensure that 100% of funds raised go to the great charitable causes we support.

Each year the Lap 99 Foundation will hold a major fundraising effort surrounding the Indy 500 and focused on the driver who leads the race on Lap 99.  It will be a contest, will be fun, and will help people in need.  Stay tuned for details!

Jamie and Liz Roe hope that the Lap 99 Foundation outlives them which is why they are investing leadership roles in the foundation in their daughters.  The Lap 99 Foundation will always be based on our love of God, Indycar, the Indy 500, our family, our veterans, and helping those in need in our community.

THE GUIDING PRINCIPALS of THE

“Do you not know that in a race all the runners run, but only one receives the prize? So run that you may obtain it.”

Paul’s First Letter to the Corinthians 9:24

“I have fought the good fight, I have finished the race,
I have kept the faith.”

Second Letter of Paul to Timothy 4:7

STAY UP TO DATE

Thank you! Your submission has been received!
Oops! Something went wrong while submitting the form.